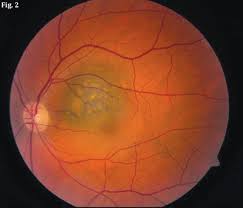 A choroidal naevus is similar to a freckle on the skin. Choroidal naevi are quite common, being present in up to 1 in 12 adults. Unfortunately, like a nevus on the skin, a choroidal nevus can uncommonly grow into a malignant melanoma.

A choroidal nevus rarely requires treatment. Photography is often used to document its appearance over time. An eye specialist with expertise in eye tumours (ocular oncologist) will assess this appearance along with other features to estimate its potential to become malignant. This assessment may include ultrasound and other imaging tests.

In general, a choroidal nevus should be assessed at least once a year. Some choroidal naevi show features or ‘risk factors’ which imply closer monitoring is required. These features include orange pigment on the surface of the naevus, associated fluid beneath the retina or thickening of the naevus. In this case the naevus may be considered ‘suspicious’ or ‘indeterminate’ in nature.